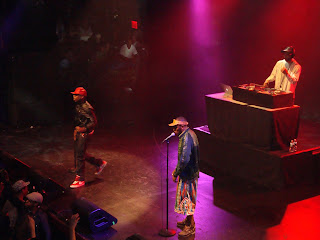 Black Stars shine on a night worthy of the honor, The Nokia Theater NYC. Performing Arts should have the reputation of being one of the worlds oldest living profession. But when performing arts meet Hip-Hop, a supernova occurs that can only be described as BLACKSTAR. May 2009 was fortunate enough to share such a night when Mr. Smith and Green took time out of their busy schedules to keep us in check–mic check, that is. To put it plain, the show was simply sick!

Pun intended, because another group worthy to be mentioned also shined bright that night –their name, BLACK VIOLIN (BV): members Kev Marcus and Will B “simply sick”, the Violin Vertuouso who’s song fanfare can be heard as the soundtrack to the Vitamin Water add campaign where fans are boasting who is better: Kobe or LeBron. Make no mistakes BV are maestros though to some they may look like well seasoned-newbies. They have a simple methodology, show the kids a better way and lead by example. They have toured extensively and shared the stage with many well known artist. http://blackviolin.net/ 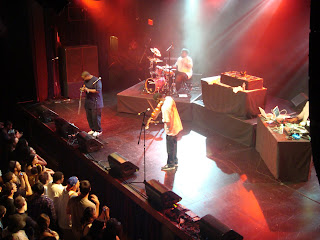 In contrast to the note worthy artists of the night, the “Debbie Downer” moment was brought to us by someone who shall remain nameless, but must be prefaced by saying, only a chosen few have made the seamless transition of reinventing themselves from producer to artist. More important than being booed, is that one has to take into account that the revelers represented a demographic that would have been unheard of in a Cold Chillin concert “back in the day”. Needless to say race deck was stacked like a DMV application: Caucasian, Hispanic, Black, Asian and Other (Pacific Islander). So how in the world can a ‘brotha’ be booed by mostly Caucasians? It can only be explained by assuming that consumers are getting more well informed and they look for substance in their goods and services. The other explanation is, the crowd to song selection that night just didn’t work: it probably worked somewhere else. New Yorkers are cut throat.

As for our main event, Mos Def and Talib Kweli brought the house down, without a doubt. Both Mos and Talib (yes we are on a first name basis) have a stage presence that commands respect. The two personalities are different and it is very evident they feed off of each others energy like best friends or favorite cousins who always pick up where they left off after a long absence. The technical rider was simple: Two mics, Two Turntables, Bottled water and towels. Less is more. As for the musical line up–it was everything I could have imagined, it was like a CD track listing: Definition, Re: Definition, Brown Skin Lady, Respiration, and some sure fire crowd hits.

Talib and Mos (I had to switch it up) also took some time to do signature tunes from their respective solo projects. “Mr. Talib Shakwee…” reminded us how to pronounce his name from The Blast (Kwah-lee) and Move Somethin’ from his 2000 Album “Reflection Eternal – Train of thought”. While Mr. Def told us how to get The Panties because Umi Says, respectfully from “The New Danger”-2004- and “Black on Both sides”-1999- we might see where some rappers might have been persuaded to sing without the assistance of the auto harmonizer today. Mos has chops! Damn you Larry Blackmon, Cameo and the auto harmonizer: and now cleverly placed “Aaooow!” 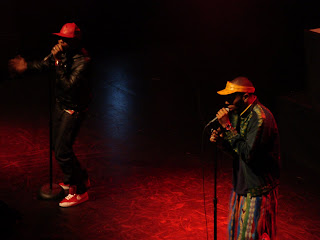 Since the show I have recently purchased the Black Violin’s self title album “Black Violin”- its truly a must have and Blackstar has always been in my iPod: now they are getting more spins than Nielsen BDS. I hope to catch the next show.